We have left the exciting part of the Pyrenees and now need to work our way to the Mediteranean.

I love these steps built into the rock wall

We walk by lots of ruins

We stopped in the town of Arles Sur Tech to get some food at the supermarket. It was a huge downhill to get there and then of course we had to climb back up.
We stopped for a break at Ecogite Moulin de la Palette. They were cooking dinner in a solar cooker that looked like a big satellite dish. It was so tempting to stay but it was way too early.
We met 2 HRP hikers going the opposite way. We had a great break talking to Philip and Serge. Philip has a Zpacks Duplex tent and was interested in looking at our zpacks packs. I’m hoping to get their finish photo once they get to Hendaye. They have a lot of wonderful and hard hiking coming up. 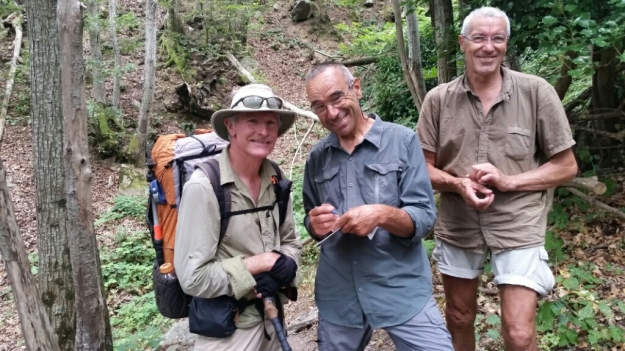 Wired had given us a great tip on a water source so we were able to do most of the climb without carrying a ton of water. The owner of the ecogite had told us the last place to camp was at the Col Cerda.  When we got here 8 women soccer players had just arrived and were also camping here. There wasn’t really any other option but to camp here also. It’s not super flat but it will work. There is a lot of horse poop around and we can hear their bells. Hopefully they will stay away.