It was a lazy morning. I had a great breakfast at the cafe across the street.

Then Nathan, Owen and I hitched back to Pelorus Bridge. It was at least 10:30 by the time we started walking. The first part was a 13 km gravel road walk which went by pretty quickly. I turned down one ride offer.

Next was a really nice trail along the river with several swing bridges.

Since I was able to hike each section faster than the estimated times on the trail notes I decided to hike up to Rocks Hut. The last part was a steep 600 meter/2000 ft climb. I got to the hut at 8pm. Ugh, my pack is heavy with lots of food.

Toilet with a view. And it flushes!

I met some more TA walkers…Sean from Canada and Arno from Germany. There are also 2 Dr’s from Nelson who mountain biked 13 km from Nelson and then hiked 1 hour on a different track. It’s a really nice 16 person hut. It’s about half full and a weekend and only one hour from a road…. so that’s pretty good. 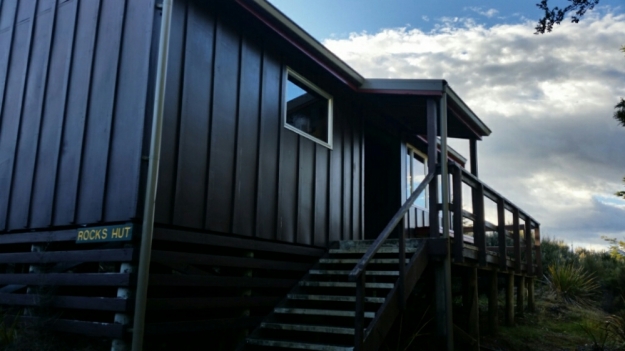 Rocks Hut the next morning.