I had a great breakfast at North Drift, the new cafe in town. I had 2 fried eggs, toast and coffee. I have been ordering long blacks for coffee and every time it’s different. Sometimes about a tablespoon and other times a cup. I still have to figure that one out. And I bought a sandwich for lunch.  This is right on the trail so I could just leave from here. Immediately I met up with Alex and Helen and we walked the road out of town.

ULA Olm 2 packs. Much smaller than the norm here.

Garrett and Jackson were at the junction of road and the track onto the Herekeri  Forest. 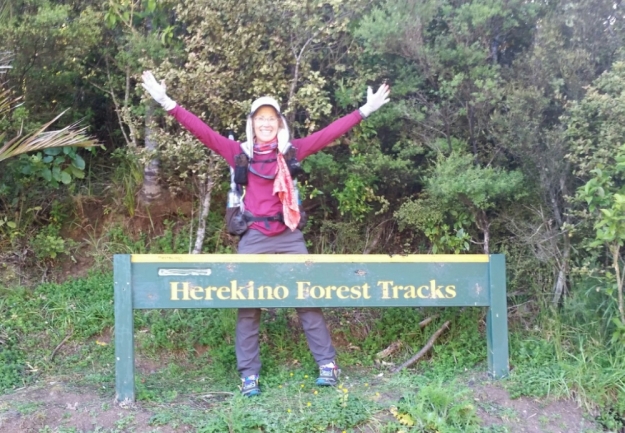 I started into the forest with Jackson. Then he took off ahead. I am so fortunate to have a day like today to hike this section. It hasn’t rained for several days and it was sunny today. But it was still extremely muddy and slippery. And some parts were ridiculously steep. I can’t even imagine what it could be like in wet weather. I thought I took some pictures of how bad it was but I guess I didn’t.

It’s called a forest but it is really more like a jungle. The huge kauri trees were impressive. There were vines that liked to try to trip me and grab my folded umbrella and I did fall once. Roots were slippery but did make good stair steps.

The trail is in there smewhere 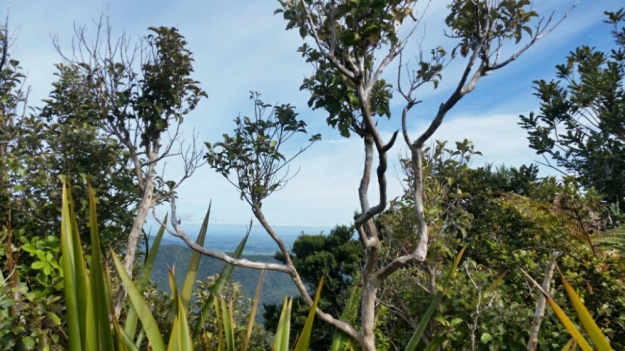 There were even a few views

Once I was out of the forest I walked on roads most of the rest of the day. The road walking was awesome. I never thought I would say that. But I felt like I could actually walk. And the roads weren’t busy at all. They were dirt or gravel and amazingly pleasant.

Near the end of the day it was just Chaos and me. The original plan was to just walk a couple more kilometers to a campground. It wasn’t on our maps but it was in a guidebook and someone we talked to in a little town we passed said the campground was just up ahead. It wasn’t. We kept walking up hill on the road for another 4ks past where we were going to stop. Then we entered the Raetea Forest track and luckily near the top of the first climb we found 2 flat spots that weren’t overgrown. So that made today a big day but sets us up for easier days for the next 3.

Water:  After Takahue you turn on Takahue Saddle Rd. There are several streams coming down from the mountain to this road. The last water before the Raetea Forest track is by a “No Fires” sign on a gate and across from a barn with a rounded roof. This is most of the way up the road before the track starts. Probably around km 138. There is not water again until you get to Makene Rd (little streams next to cows) or the river at the highway.