Our time with breaks 11 hours
I was expecting easy cruising all day. It mostly was except for the climb this morning to Bocca di Foggiale. Several places required both hands on rocks. 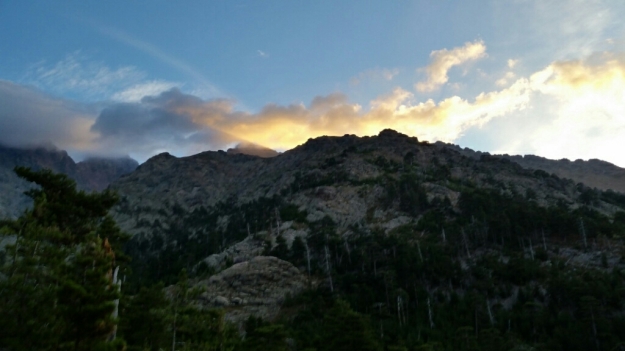 Jim was waiting for me at Bocca di Foggiale

When we got to Refuge de Ciottulu di I Mori we had 2nd breakfast of a 3 egg omelette with Corsican goat cheese. We ate outside because they were spraying for bed bugs inside. I really don’t know if these refuges have a serious problem or if they are being very proactive. One place told us they spray 4 times a month. 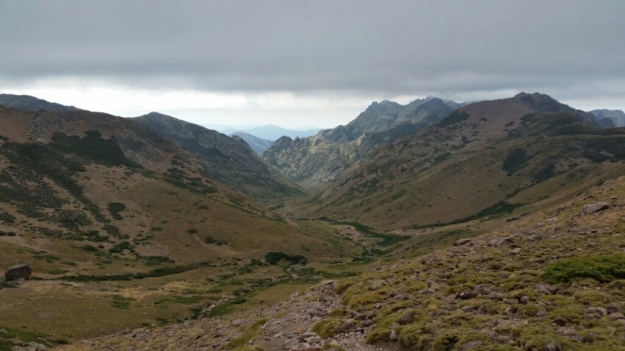 Why do we never make time to jump into these pools?

We had a nice downhill thru pine, birch and beech to Hôtel Castel di Vergio. The gite has a very good store. The camping here looked good and they have hot showers, which we really need. But it was only 2pm when we finished eating lunch so we kept going.

The rest of the day was more like the PCT than anything we have walked on all summer. We were actually just cruising along.

Near the top of the last climb we caught up to a horse and rider with a loaded donkey in tow. The rider would not let us pass. We finally did pass at a wide spot but the rider then sped his horse up and tried to get us to pull over. Luckily the trail turned into a rocky descent and he had to slow down. I was behind a horse’s ass and then found out the horse was being ridden by a bigger horse’s ass.

Look at that sweet trail

We stopped at the Bergeries de Vaccaghja and bought bread and cheese. They also had other packaged food for sale but for some reason it was only bread and cheese we could buy. 2 kind of strange encounters in a row was a bit disconcerting. Everyone else has been so nice. The fact that we don’t know French doesn’t help. Many times Jim and I will interpret things completely opposite. So much is lost in translation.
We got to the Refuge de Manganu at 6:15. We bought pasta, tomato sauce and salami and cooked it on the stove in the refuge. We used their pots, plates and forks. With wine it was another great meal that we didn’t have to carry.
The choices for a camping spot were pretty dismal but we are making it work. I know I will sleep well.