We have been told that the only animal we need to fear is a sheep dog. At 4am I awoke to growling and barking. It was close. It went on for over 2 hours. I was really frightened at first and was afraid to move. Finally Jim started talking and said let’s get going. The dog kept barking. Once we took our tents down and packed them up the dog, which was only 10 feet away, wagged his tail and walked away. I guess he just didn’t like squatters on his property.
Today was gorgeous. Really clear skies which made for amazing views of layers of mountains. And my legs felt good. I think they are still feeling the benefit of 2 days off and lots of good eating. And then there were the rocks. Lots of rocks. 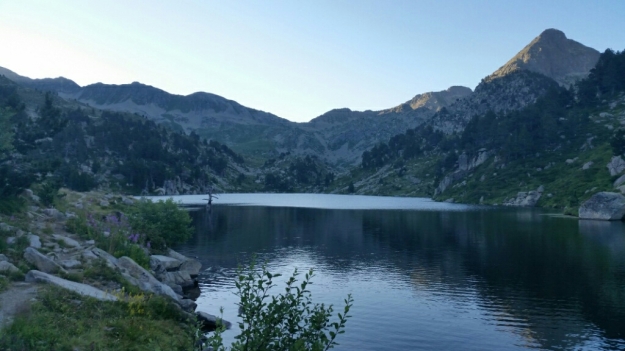 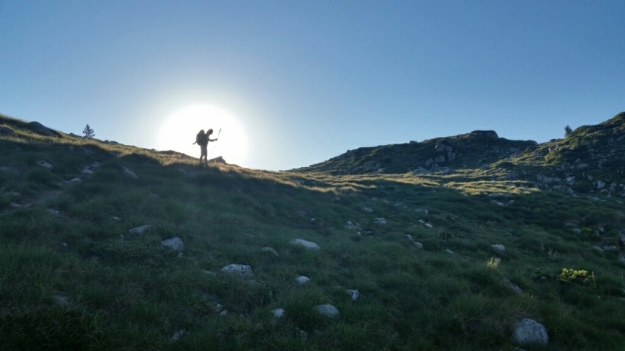 Wired told me the climb up Tuc de Marimanya was a bitch. She had rain and fog. We had perfect weather. She was right about the top part. It was really steep and really hard and really rocky.  I can’t imagine doing it in rain.

Looking the other direction from the Tuc. We walked across this ridge, then to the right and the left. It was gorgeous

View from the ridge walk

The ridge walk ended at Col d’Airoto. Then we went down and across the biggest rock jumble I have ever tried to walk across. It was awful. My feet hurt just thinking about it.

And one more view.

Then we had a 1200 meter descent which started off as one of the easier descents. It ended in confusion and really screwy. Wired had tried to explain to me what the end of the descent was like because it was confusing to her also. But that didnt help us. Oh well we finally got to the tiny village of Alos de Isil. I had been dreaming of a shower all day. Especially after it heated up. We found the Refugi d’Alos and rang the door bell. No one was home. I phoned the number that was on the door. The lady gave us the code to get in. Score!  It’s awesome. Very new and very clean. 2 bathrooms, a kitchen, dining room and a room with 20 beds… all for just the 2 of us. €20 each. I really didn’t want to walk anymore and I got my shower.