Today was worth waiting for. No rain. Great temperature. Nice views. We met Wired at 7am as planned. We took off our shoes, waded into the Atlantic Ocean and took all the required photos. Jim and I filled up little bottles of water which we will carry and empty into the Mediterranean.  Hopefully.

In the first couple of blocks we stopped for coffee (for me) then a bakery for quiche. We met up with Martina from Brittany and played leapfrog with her all morning. She is hiking the GR10 so we were only on the same route until lunch. She doesn’t want to stop in towns so she is carrying 20 days of food. She is very strong to be able to do this. I could not.

After walking thru town we walked on dirt roads and climbed up into the hills. We could look back and see the ocean getting farther and farther away.

Lunch was at Col d’Ibardin. This is at a paved road and is a popular place for tourists. It’s on the French Spain border. Shopping in Spain is cheaper so many drive up here to save money. We stopped at the first supermarket to buy some food for today and tomorrow. We later figured out that the Spanish stores were further down the road and still on our route and cheaper. We didn’t buy much so it didn’t matter. For the HRP this might be one of the best resupply places. There are a couple of small stores coming up so I just bought the minimum. This is a hard trail. I need to keep my pack as light as I can.
I started with just snacks for 2 days plus a dehydrated dinner that Wired gave me. For lunch I bought a panini from a small shop at Col d’Ibardin. 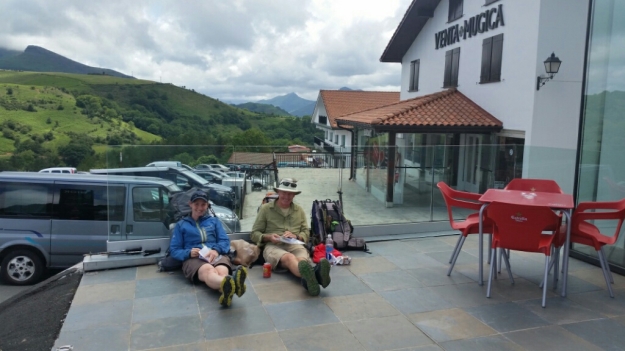 Climbing up La Rhune was next. It tops out at 900 meters. We walked up a steep dirt/cement road.  At the very top, which we didn’t go to it got mostly fogged in. The best part of the day was next. 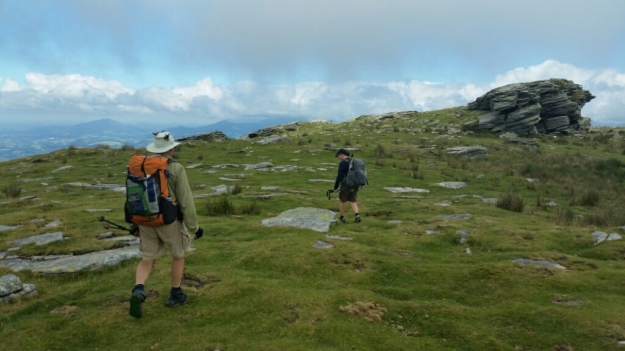 We walked across grass fields strewn with rocks of all sizes.  The grass had been mowed by sheep. The views were awesome.
Then we got on a trail and went down, down, down. It’s early in the hike for this. My legs felt it today and will probably feel it more tomorrow.

We are now camped on a grassy area at Col de Lizuniaga. The guidebook gives hours not distances. We were pretty close to the listed time of 8:15. There is a bar/restaurant/accommodation here but it doesn’t open until July 15th.
I had a great dinner. I got it from Wired via AllGood. Pork, potatoes and peppercorns.  Wired boiled water for me since I don’t have a stove. It was very yummy.

The sky has totally cleared up. It’s nice to be in my tent. I will be asleep way before dark which doesn’t happen until way after 10pm.